Singer, Song-writer, Worship leader, Musician and Producer.  Click the link below to visit my YouTube channel to check out my music. Please also check out the press release below about my debut project. 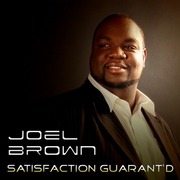 The five-track EP (produced by Marho Ovie-Bateren) promises a few special surprises and something for everyone. Five tracks might not sound like a lot, but this EP really proves that good things come in small (digitally downloadable) packages.

With Satisfaction Guarant’d, Joel aims to make it known that true and lasting satisfaction is only guaranteed through a purposeful and intimate relationship with God. The intro track is a teaser of what is to come when Joel’s full album is released later in the coming years. The second track, ‘Wait on the Lord’, is a re-working of a familiar hymn. This is where old school meets new school, with guest rapper Sayo ‘Mighty’ Martin throwing down a hard-hitting eight bars of heat.

‘Can’t Help But Praise You’ is an amazingly feel-good track featuring an instrumental piano solo from producer extraordinaire Marho Ovie-Bateren. The fourth track, ‘Born to Worship’, is a reflective, introspective song that challenges the listener to consider the purpose of their existence. And finally, we have a stripped-back, heartfelt song of intimacy between man and his Creator, simply titled ‘Speak a Word’.

Satisfaction Guarant’d is available for digital download online from stores such as iTunes and Amazon MP3.

Click here to buy my album on itunes
Powered by